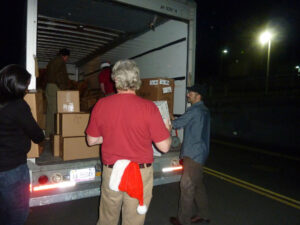 Late in the fall of 1999, a group of friends were looking for an opportunity to give back and pay it forward during the holidays, specifically for children. We heard an ad on the radio from one specific charity asking for help and we called and asked what they needed. The Director needed help figuring out how to get presents to kids living in motel rooms across the state.

Our group immediately took this on: covering gifts for 300 children in 15 motels from Amesbury to New Bedford. We put together a weekly call for about five weeks to organize, and got the list of all the kids’ ages, genders and locations. We split up the list and sent everyone out shopping. We had a total of over 80 aspiring elves shopping and wrapping the week before Christmas and put together a spreadsheet to make sure every child got something age and gender appropriate. All in all, 15 motels in 15 cities from the North Shore to the South coast of Massachusetts received deliveries over a three-night period.

It was magical. We would pull into the parking lot of a motel, don Santa hats and, as the light snow fell on us, we would knock on the door, greet the mom with “Merry Christmas” and hand her a bag of presents for her children.

The momentum that came out of these projects was the birthplace of Operation ELF. E.L.F. stands for Everybody Loves Families – but in truth, everybody needs family. Our purpose is to be a part of an extended family for those that need it during the holiday season.

That next year, 2000, Operation ELF was in full swing and we found out about and sponsored the wishes of about 450 children. Year after year, awareness grew and the numbers of children in our extended family grew along with it. Last year, during the pandemic crisis, Operation ELF delivered on the holiday wishes of nearly 1,700 children in eastern Massachusetts, New Hampshire and Vermont – and beyond.

Operation ELF continues its mission to care for the children that are not covered by other holiday-oriented gifting programs, and the need is still growing.